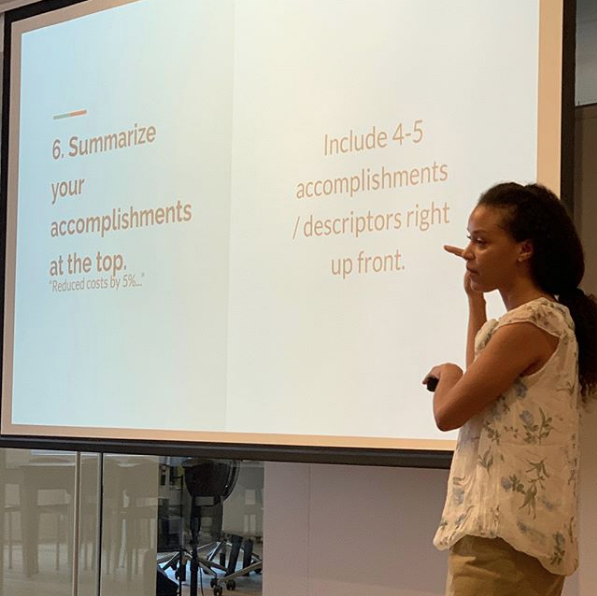 On Saturday June 29, 2019, I found myself again at UX Camp. UX Camp, which I also attended and wrote about 2 years ago, is an “unconference” which means that there is not set schedule of topics or speakers. Instead, the participants come up with the schedule by proposing talks they want to talk about. (Then the organizers choose the time and which room.) This year’s UX Camp was again held at General Assembly.

As this was my second time going, I tried to be a little more social and chit-chat with other participants. Unfortunately, Jared Spool and Dave Malouf weren’t in attendance. Jared Spool is a great speaker — here’s a video I watched recently. However, I decided to not only get over my fears of small talk, but also get over my fear of presenting my ideas in public. So I gave a presentation, based on one of my favorite prior blog posts of this year, “My Favorite Pro-Tips from NYPL Experts on Crafting a Resume”!

Ok, only a few people attended, but presenting was a very satisfying experience.

Most of the people who signed up to lead sessions did not have slides. I did because I based them on my blog post, so it was relatively easy to put the deck together because my thoughts were already written and organized.

Other than my own presentation, here are a few sessions I attended:

One of the participants wanted to discuss interviewing, because she found herself in a new situation and was curious about other people’s experiences. I used the opportunity to make a comment on my observations about what UX hiring managers are looking for, especially regarding portfolios, according to the articles I’ve researched online.

This was kind of a workshop about mentorship. We spent a bit of time discussing our experiences with mentorship. After getting through everyone, the speaker led us through an exercise where we discussed what a mentor is and is not.

First, a mentor is not:

We then broke out in small groups to talk about: How to create boundaries, Framing your conversation (with your mentor); and Getting from having no mentor to having a mentor. Afterwards, we shared our discussions.
Tips on Working with a Mentor

A book mentioned was the 2-Hour Job Search by Steve Dalton.

Another talk I went to was by an architect who was a very talented illustrator and hoping to break into product design. His talk was on Visual Storytelling.

He showed us some examples of his work and we discussed the story he was trying to tell with his images. He also discussed his process a little.

Some tips I got from him about visual storytelling:
– Pick key moments to visualize
– Show only 1 (one) idea per image
– Include enough relevant information, but don’t go overboard in detail

I wanted to ask him questions about design and improving in visual design, but when I tried to ask my questions, I found that my anxieties about improving in design only aided in making my words come out jumbled. He tried to answer anyway and suggested that just knowing what’s good design and what’s not good is OK.

The very last talk I went to was about Cultural Relevancy and Experience Design. It was a very interesting topic. The speaker shared with us situations in which technology (sensors, photography) failed her in key moments due to the technology not being tested on a diverse audience. It’s true that some sensors are poorly calibrated to pick up darker skin tones. For instance, “self-driving vehicles may have a harder time detecting people with dark skin”. It’s probably not because the technology cannot do it, but because it’s not being testing for a variety of skin tones. https://www.businessinsider.com/self-driving-cars-worse-at-detecting-dark-skin-study-says-2019-3

I also got some recommendations for books:
– Design in The Era of the Algorithm
– Politics of Design
– Mismatched

Although I missed seeing some well-known names at the conference, I still got something out of it — namely public speaking experience.