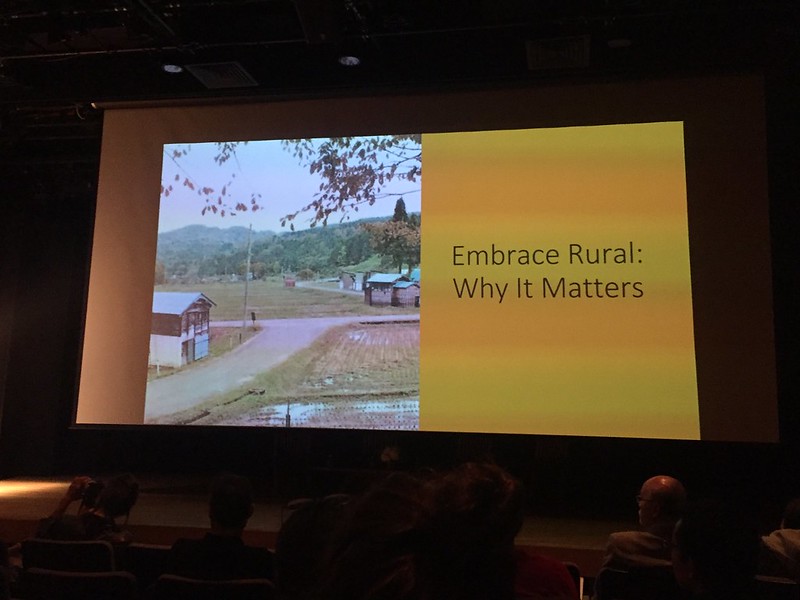 In late October, I attended a talk about economic development and innovation in rural communities in Japan and the US.

What got me interested in this topic was a video I watched about a rural Japanese town where pretty much the only people left were older residents; many young people had moved to big cities.

Despite everyone being 65+, the residents still try to maintain an active way of life. The video comes from two researchers focused on a study centered on “active” aging — “active” being a term created by the World Health Organization. You can read more about “active aging”, the Global Age-Friendly Cities Project, and also download the brochure on their website.

Being Old in Rural Japan

Synopsis: The story portraits two single-living seniors: the 84-year-old Shimako, a former farmer wife, with a husky deep voice, who still grows vegetables. She regularly meets her neighbors for tea chats and joins the village choir and gymnastics course. Her biggest passion however is gateball, a very popular senior team-sport in Japan, similar to croquet. And there is the 93-year-old Genichi, the oldest man in his village with driving license, who hates sport but loves composing short poems (tanka) on daily events. As he enjoys his freedom in old age, deciding for himself when to get up and when to work, he refuses to live with his son’s family. Also he still cultivates his agricultural field for self-subsistence.

I thought it was a fascinating video. It’s about 35-min long, in German with English subtitles.

The talk was co-organized by New Food Economy; Design and Urban Ecologies, Parsons, The New School for Social Research; and Slow Food New York City. Presented at the Japan Society as part of their Innovators Network. 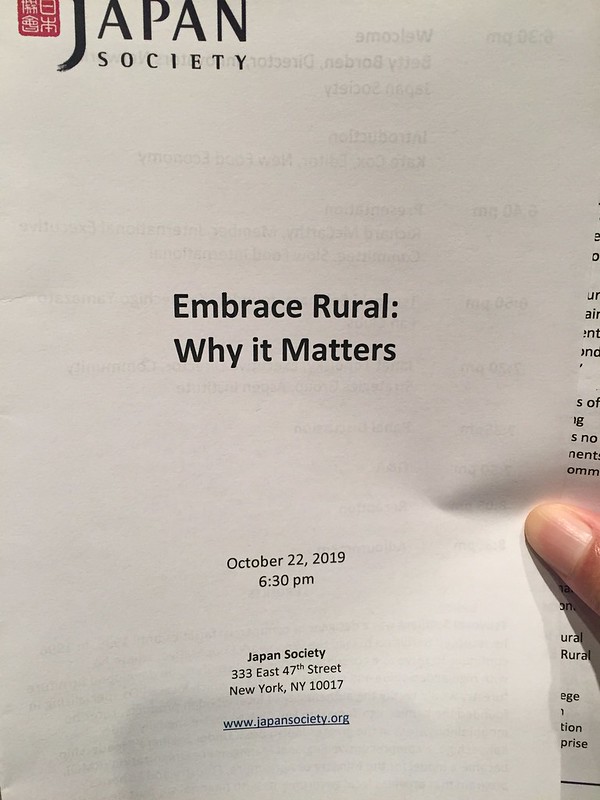 Our first speaker was Richard McCarthy, from Slow Food USA. He went to Japan to discuss and explore rural strategies through the Innovators Network. There was a moderated discussion following the presentations, led by Kate Cox, New Food Economy editor.

The Japanese speaker, Tsuyoshi Sekihara, is an artist who is involved in rural Japanese development. He was sharing the concept of Kuni and how it developed.

It’s easier to show the manifesto rather than explain it. 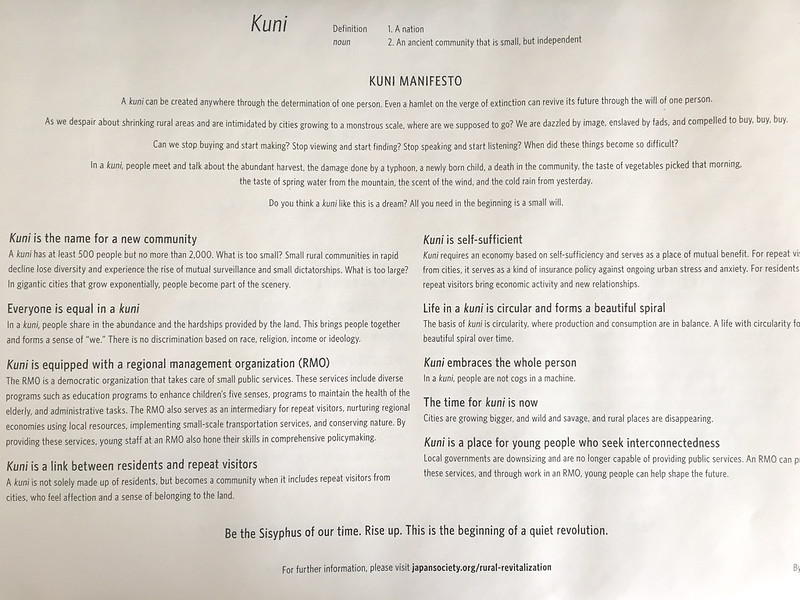 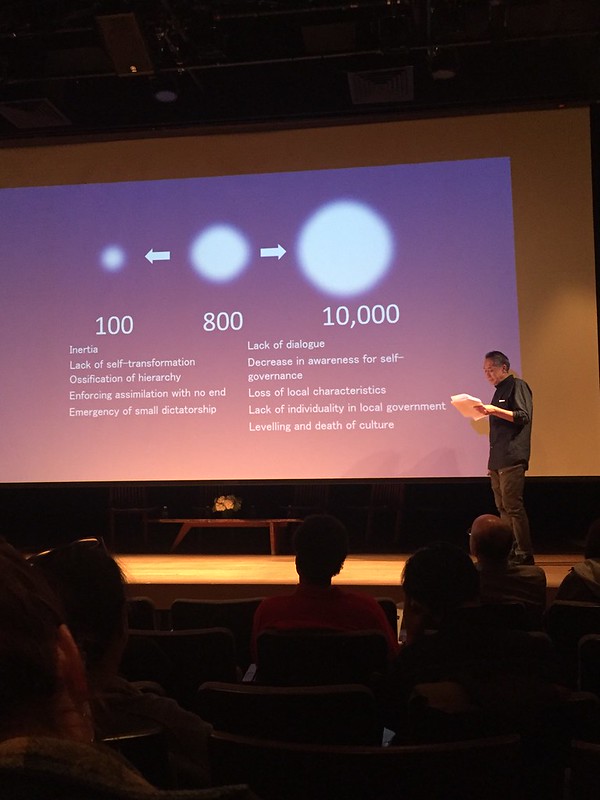 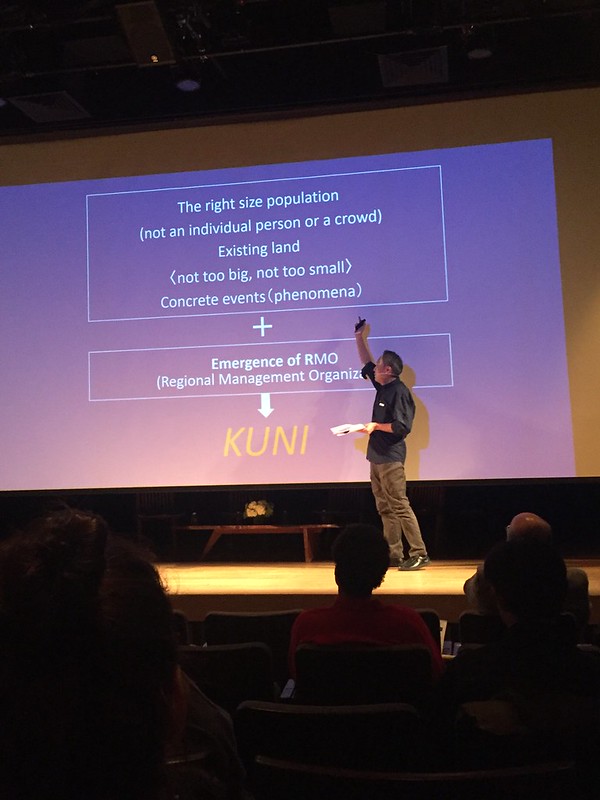 Rural US and the Aspen Institute 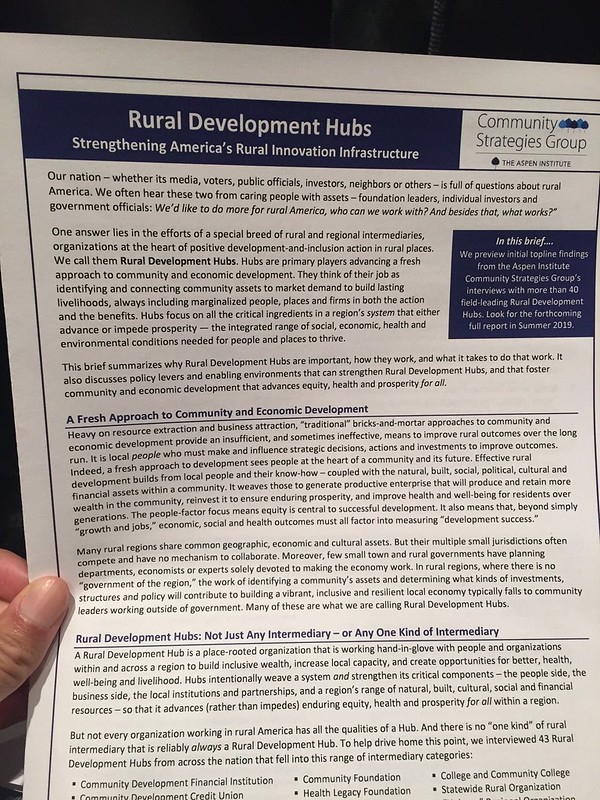 Seems like there are a lot of business opportunities in rural areas for creative entrepreneurs. Rural areas tend to get overlooked. Traditionally, businesses focus on scaling up. Rather than focus on scalability, the speakers suggested focusing on penetration. That is, what percentage of a population is using your business.

Marketplace, on NPR, recently discussed the lack of broadband access in rural Georgia.

A lot of rural America is a desert when it comes to high-speed internet access. And that’s a drag on economic growth: Communities without broadband have a hard time attracting new residents and businesses…

Another problem rural communities have is dwindling populations. Here’s a recent CBS Sunday Morning video about the population struggles of small towns in Japan, now facing extinction, as the country’s overall population decreases from a peak a few years ago. For instance, in the town featured in the video, the school’s 6th grade class now only has 6 students, down from dozens.

The video above reviews some of the more creative and technological solutions Japan has invented. Ideas range from repurposing malls to senior centers, to high-tech mausoleums, to robots — Japan likes robots — officiating weddings due to a shortage of monks. Lot of interesting concepts to think about.

Now that I think about it, this story of rural villages populated by an aging population reminds me of Tokyo Story, by Yasujiro Ozu.