To do the project, I set up at a couple of intersections in NY, and focused the camera on people already in cabs or people about to get in or out of cabs. I took footage at a couple of intersections and areas around Manhattan. Columbus Circle, Times Square/Port Authority, Houston and Allen/1st Ave, and 9 Ave. Most the shots were at night, but there were some during the day too – just haven’t worked them in yet.

The Body Instead is about exploring the subjectivity and objectivity of the body and the self, using mold-making and casting techniques and materials.

This project questions how the mind perceives the body and the self are explored, along with views about transcendence and immanence in relation to conscious thought and the existence of the self. In this project, a variety of mold-making and casting materials, such as plaster, alginate, silicon and food, are used to recreate and represent the human figure. The resulting cast, as a representation of the body’s impermanence, will be destroyed and subsequently preserved or consumed as food. Ultimately, the goal is to make the body both the source and the object of the aesthetic experience, by combining the experiences of the physical body with the perceptions of the conscious mind.

My thesis is an exploration in materials, using the body and the self as subjects, excluding our notions about body image and personal appearance. I am recontextualizing the image of myself using different materials to represent my body and I am exploring the relationship between the external (camera) “eye” or lens, the eye of the mind, and the I of the self. I will be exploring my self-image and my conscious and unconscious reactions to experiencing myself as an external physical object and as a concept.

I live in a good neighborhood for going out, or finding many, many adults under 40 hanging out in bars. Last night I was walking home and passed by a cab that had picked up 4 people. A girl was talking, but seemed little uncomfortable with not being hidden in the back. The cab driver definitely seemed like he’d prefer her sitting in back. Another cab was behind that one, and it had 1 or 2 people in it, one passenger talking on the phone. I wanted to know what the person in the next cab might have been doing, but it was empty. So I got the idea to make a video of people in taxicabs, as some kind of an ‘idiot with a tripod’ video featuring people in taxicabs.

I think the subject is interesting because people in cabs have a personal-public existence. I think cab passengers feel sort of self-important. Compared to the subway, bus or walking, it’s not cheap to ride in cabs. And, when you’re in a car there’s some kind of boundary between you and everyone else; it feels so good to get out of it and have some fake privacy. This self-important privacy is fake because taxicab passengers are not car owners, who have the pride of owning a car to help them feel important and so their privacy is really their own. For taxicab passengers, there’s a driver so they’re never alone and they just stepped off the sidewalk where I’m still standing. Plus, they’re in a car painted to indicate that they’re in a car that’s not their own. So, I like the idea of peeking into their false privacy.

To do the project, I will set up at a couple of intersections in NY, and focus the camera on people in cabs while they wait for the light. I’ll try to get a couple of intersections, maybe 5 major ones. And get some video of people at different times of the day, starting with early morning (if possible), mid-day, to night. Possible intersections might include: Columbus Circle, 14th Street and University, 1st Street and 1st Ave, 6th Ave and ???. Or, maybe I’ll just take video of intersections on the F-line so it’s easier for me to get home. I’m not sure how I’ll present the videos right now, but I was considering some kind of structure/installation.

I had this idea to get a group of students, take a video of their faces, and then use AfterEffects to make their face do things they couldn’t actually do in real life. I did one other student, but ended up doing the most work on my own face because it was very time consuming and I wasn’t sure I wanted to continue with the project.

I ended up making about 3 versions of this video. Every time I tried tweaking, things started to look more fake – like you could really tell where the editing was happening. I ended up sticking with version 1, but I need to go back and add a border so that the camera moving left and right isn’t so noticeable.

I still like how it turned out. Pretty weird.

For my Giant Stories Tiny Screens project, I finally was able to put together my train videos from last September. My concept is to use the different perspectives of the videos to experience a train ride to Beacon, NY. The sun goes down, people ride the train, we pass bridges and other platforms, the train conductor passes by…etc. 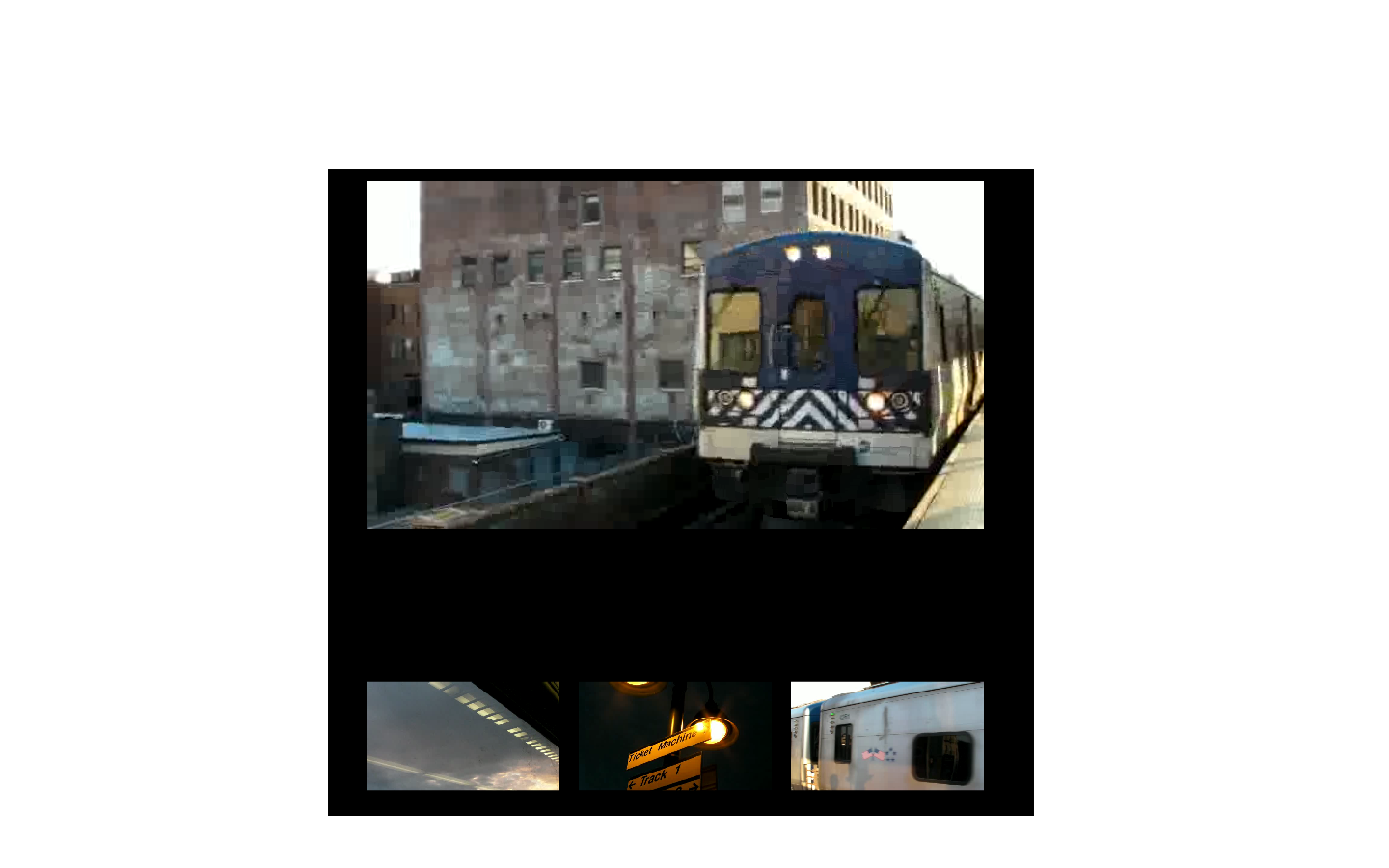 The videos are linked together with different keywords, according to what I experienced, including: inside, outside, ride, looking, platform, trains, people, lights, night, exploring, things, places, signs. I want to keep working on it. It’s been fun.

For my Redial midterm project I worked on creating an anonymous karaoke phone line. I still have work to do, but here’s a little summary.

How it works:
Call in
Pick a song
Sing (talent optional)
Listen to your song

Functionality to add:
Recording the conversation (like eavesdropping)
Listening to your song
Listen to other people’s songs
Send your song to your email address

Difficulty working with Monitor and MixMonitor. The context is kind of different for both, which makes it harder to figure out where the record files should go and how to get them out. It should definitely not be impossible.