After I did my additional research, I brainstormed some drawings again and finally had an idea. I decided to make a model of a hare that fit over a large flat-screen plasma television/monitor, in which several pieces of the hare had been removed through which you would watch small videos related to hare mythology and stigmas related to women, as previously mentioned. The removed pieces would look like raw flesh and would be pierced with knives, forks and spoons.

This piece plays on the idea of the hare as a mythological animal, as seen in its leaping position that has been commonly used throughout history in various implementations, such as coins, paintings, sculpture, and jewelry. At the same time, the overall form I’ve created also represents raw flesh and is meant to relate to the hare’s long history as a prey animal and food source. The round background that the hare is mounted on relates to the moon, to which hares are overwhelmingly associated in myths around the world.

The videos I’m using come from Archive.org. Most are from the Prelinger Archives except for a few, such as the Bugs Bunny cartoons. The large majority of them are dated from 1940-1960, though the range of dates comes from circa 1900-2000. When I started thinking about how I was going to relate the myths and history of the hare, I realized I needed to select videos that were more versatile than just stag and burlesque films. Thus, the film clips I chose range in subject matter from: burlesque and more explicit stag films, Bugs Bunny episodes, children’s nutrition, egg painting, male and female reproduction, censored pornography magazines, to clips about affection and love. To select my clips, I surveyed a lot of films. In some, I used just one or two clips but I still had to download them, import them into Final Cut Pro, and edit them. Out of 60 videos, I made 6 QuickTime files lasting about 6 minutes each. (I also made a 7th film that would only be used in the background which, at the time of this writing, I’m not sure if I’ll use yet.)

To project these videos, I used a free program called Video Projection Tools, v. 4.1. It was made in Max/MSP and it allowed me to rotate the video player window to fit my window cutouts. Since I’m running 6-7 .mov files, the computer I need to use has to be relatively fast and has to have Max/MSP installed.

I put all of my construction photos on Flickr and there are descriptions for each picture, so at the moment I won’t go into all that much description because construction was very involved. In phase 1 of my project, I tried to incorporate more Living Art ideas into the moon and I used some cellophane and some type of mesh material that I thought would nice in the light. In the end, it looked really busy and I thought it took away from the body of the hare. I also found that when people put the flesh chunks back into the hare, the put them in too far; I needed a barrier. I also didn’t go too explicit in my videos because I just wanted to make the connection, not to get to erotic.

In the next iteration, I took off the cellophane and mesh and remade the background to make the moon connection much stronger. It’s a much more attractive background. I also added another layer between the hare and the monitor, which also acts a barrier for the flesh chunks and makes the removal of the chunks a more visceral feeling. After all this, I also added a plate, which looks like someone’s just been served chunks of meat. The plate and the body of the hare are both really disgusting, but the moon helps make it look quite beautiful.

I’m very happy to have updated the look of the piece because the new looks seems to connect my ideas much better. In addition, I also made the videos more explicit and some are now a little bit longer, which I changed because I wanted to try and push the level of comfort with my pieces. When I did the video editing, I started to become both desensitized to the nude bodies and also disgusted with what seemed like exploitation of women. Making the flesh chunks as disgusting as possible felt a bit like retribution.

This was a fun project. It was a lot of work, but I’m happy with how it turned out. In the end, I felt like I had really achieved what I’d hoped – something revered yet reviled, much like hares and women.

For my final project in three of my courses, I created an interactive video installation in which I aimed to connect the mythologies of the hare with stigma’s associated with being a woman. I incorporated the hare to fulfill the requirement for my Animals, People and Things in Between class. The video aspect was for Video for New Media, and I incorporated principles I’d learned in Living Art into the film editing and the creation of the physical piece. This post is a discussion of my brainstorming process.

Before I started this project, there were a few phases in my brainstorming that included sketches, word associations and physical prototypes. In each of two classes, I created a physical model/prototype that focused on either the video aspect of my piece, or the physical aspect.

For the video aspect, I had the idea of the viewer peeking into small windows of action, so that the whole was revealed in pieces and not all at once. Using the 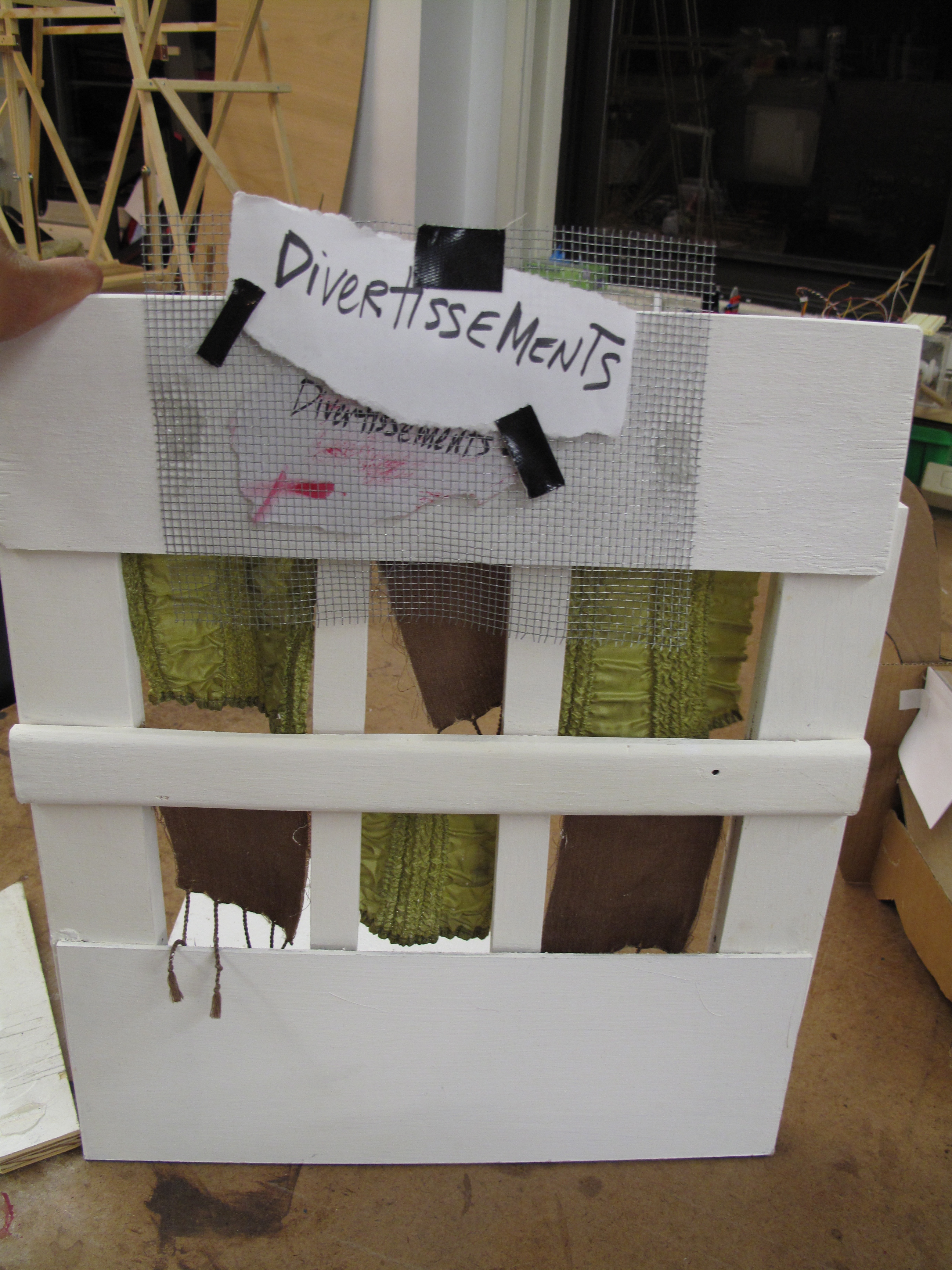 For the physical aspect, and as my research into the hare continued, I had the idea of enclosing the viewer into the project itself. The video aspect would be a part of the physical space, and would only be revealed if you were inside the project piece. I made the prototype out of cardboard and hot glue. When I thought about the scale of the piece, I was pretty sure that I had no idea how I’d be able to physically make it. Then, when I presented this piece, the feedback I got was to consider making two of them and to have some way for people outside each piece to control what happens for the people inside each model. 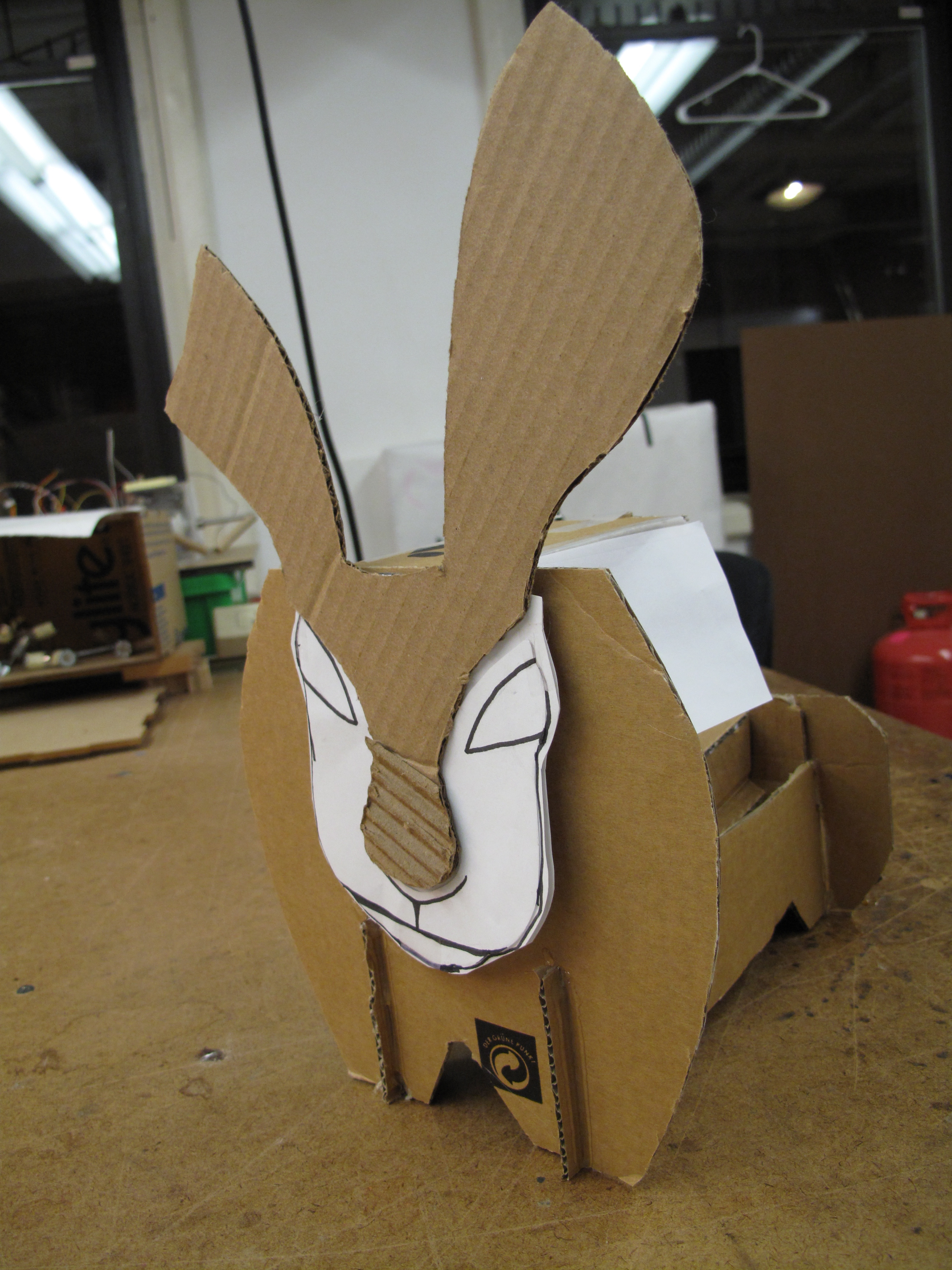 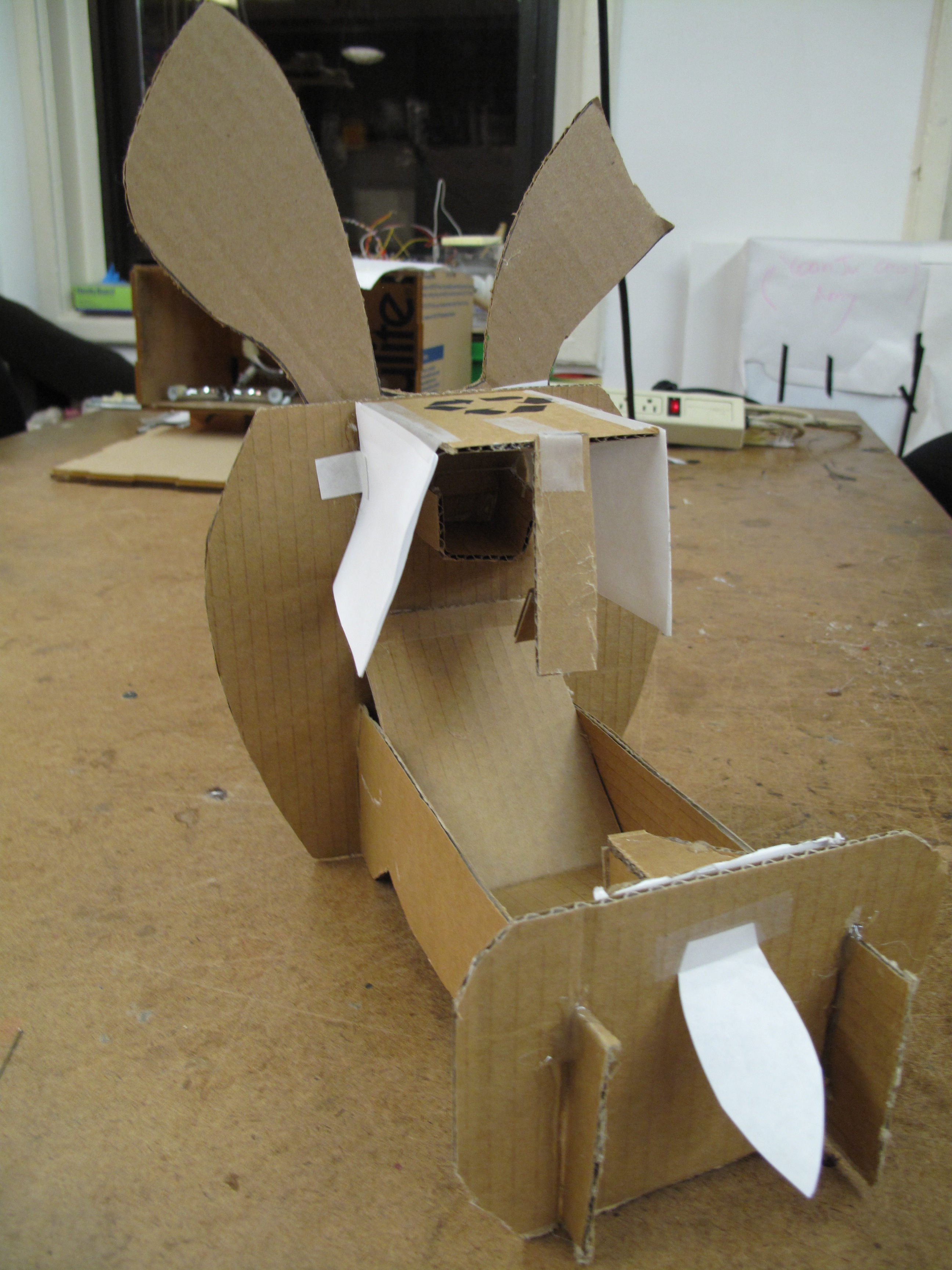 By this time, I’d done more research. I’d finished my Reaktion book on the hare. I made a list of words that seemed to connect many of the stigmas associated with women with many of the myths related to the hare. I’d also started to collect video content, which for me included mostly vintage “stag” and burlesque films from the 1920’s – 1940’s. I even found a film from the 1950’s or 60’s linking pornography to Communism and the decline of all morality. I just cut out the speaker and kept the pornography. But, though I was certainly collecting many videos and doing much editing, I eventually found myself pretty stuck. I still wasn’t sure in what physical form my project would evolve. I knew I had the idea for putting people inside a physical structure, which was to try and get them really inside my animal. And, I also had these multiple videos playing that I really liked. I drew more sketches, but I didn’t feel like I was getting anywhere. So, I went back to collecting more research on hare mythology, and found more information.

Then, maybe the day after that (or maybe the same day?), my final idea emerged….

For a Video for New Media project, I worked again with Lucas Werthein, and also Krystal Banzon, on a documentary featuring an intersection in New York City. Eventually we chose Broadway and Prince St., the home of Dean and Deluca and my hair salon. It’s a pretty hectic intersection in Soho that always seems to be busy.

Lucas, who was undeniably the most experienced person in our group, was inspired by a short film called “Latitude_Redux“:

Latitude_Redux is a condensed extract from D-Fuse’s live sonic cinema performance with the split screen representing the 2 screens used in the live show. It is inspired by the notion of drifting through the land + soundscapes of China and uses fragments of conversations, lights, + architectural forms to trace the multitudes of paths, identities + influences which make up the rapidly changing urban environments of Shanghai, Guangzhou and Chongqing.

It’s a really fast-paced short film and you get a sense of the selected urban environments in China, something that could easily be translated to New York’s urban scene. Due to serious schedule conflicts with our team, Lucas ended up doing most of the editing. One of my favorite parts of our video happens about 46 seconds in and last for just two to three seconds. What you see is a blur of many still images of people’s feet walking across the crosswalks in the intersection. We used a Panasonic Lumix and a Canon G10, both on tripods, to record those shots. We probably could’ve gotten many more, but it was really cold that day and the buildings kept blocking out the sunlight as time went on.

Pulse from Allison Walker on Vimeo.

Yet again, I revisit my deer self, for this final video blog. In this video, I take a little liberty with the humor of the audience. I won’t go into this too much, and I’ll just let the beginning shot of the legs be the only enticement. Clearly however, the sensuality of the music (Sensual Woman, by The Herbaliser) is what convinces and carries this vlog to the end.

As for the editing, much of this was me experimenting with different filters in Final Cut. Eventually, I ended up using a lot of crossover fades, blur, scale and an interesting color correction filter.

My Life as a Deer from Allison Walker on Vimeo.

In this second vlog, I strung together many video clips of different places from my apartment, which has an interesting character. My place is kind of dark, which made color correction difficult. It’s just something I need more practice with, I guess. The music is “Beat Was A Bumpin” by DJ Cue. It’s a bit lively, but also monotonously repetitive. The repetition fits with how ordinary each short video clip is, but the beat helps give the shots some animation and character that they wouldn’t have if the music was slower.

Samples from my apartment from Allison Walker on Vimeo.

Here’s the first of 3 video blogs. This one features the wall I see every morning on my way to school. I don’t really think too much of it when I walk by, mostly because I’m looking at the ground to make sure I don’t walk in crap, but seeing it like this in one continuous shot gives me a new perspective.

Graffiti on 13th St from Allison Walker on Vimeo.