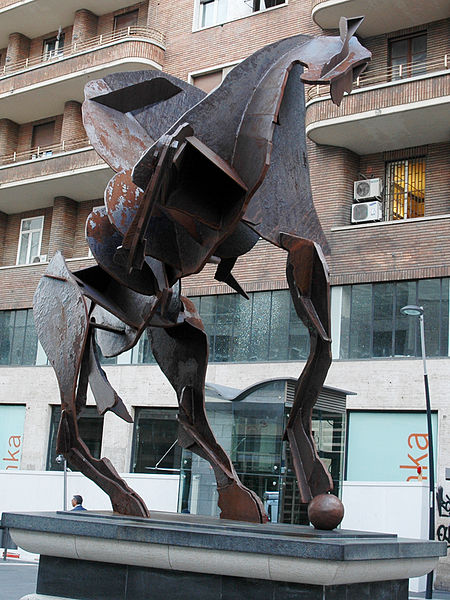 In February, I watched a EuroNews report about a South African artist named William Kentridge, whose work is being shown in Copenhagen, Denmark. Here’s the article video.

Link to the article on EuroNews.com

I was very interested in learning more about the artist after seeing that he uses a combination of video installations, animation, and live action. As seen in clips in the article, he’s also not afraid to explore the difficult history of his country. As MoMA puts it, “Dealing with subjects as sobering as apartheid, colonialism, and totalitarianism, his work is often imbued with dreamy, lyrical undertones or comedic bits of self-deprecation that render his powerful messages both alluring and ambivalent.”

This can be seen in the following video, which is embedded in the text of the article. It’s like a New Orleans marching band, set in a lyrically dystopian world.

When I looked up more about the artist, I was surprised to find that he was not ethnically African, because as the video shows he is using black subjects in the artwork. In my experience, it’s not that common to find an artist using the experience of another ethnicity in their artwork, although it does occur in decorative arts, photography, and performing arts.

I suppose performing artists do this because music, dance, and theater are somewhat universally accessible for all people. Photography is a little different, in that the photographer has to take a documentarian or voyeuristic point of view, as opposed to being part of the art. Wikipedia explains that Kentridge is Jewish, with attorney parents that fought against apartheid. Perhaps he felt like both an outsider, voyeur-documentarian and part of the struggle in South Africa.

What I find revealing is how well Kentridge’s use of African subjects shows his strong empathy and understanding of apartheid and this difficult period of South African history. He says, in Pain & Suffering, shown on art:21, that artists use the pain and suffering of others for their work.

Wikipedia explains one of his animation methods:
“in all of his animated works do the concepts of time and change comprise a major theme. He conveys it through his erasure technique, which contrasts with conventional cel-shaded animation, whose seamlessness de-emphasizes the fact that it is actually a succession of hand-drawn images. This he implements by drawing a key frame, erasing certain areas of it, re-drawing them and thus creating the next frame. He is able in this way to create as many frames as he wants based on the original key frame simply by erasing small sections. Traces of what has been erased are still visible to the viewer; as the films unfold, a sense of fading memory or the passing of time and the traces it leaves behind are portrayed.”

The video above doesn’t show one of this animation style very well, but his style can be seen in other clips. He also uses stop-motion.

Aside from animation, he uses live video and different masking and editing effects in his work. Here’s a video of him, from the Danish museum, the Louisiana, interviewing himself:

I won’t be in Copenhagen anytime soon. But if you’re interested in learning more about William Kentridge, there are examples of his work online.

Of course, there is the Louisiana Museum that is currently holding a William Kentridge exhibition. It looks like an interesting exhibit. The site is in Danish, but Google should be able to translate.

art:21 has the most examples of him working and explaining his process. There are several clips of some of his video/media pieces.

MoMA has an archival page documenting his 2010 exhibition, Five Themes. Also still available is a flash-site that contains many examples of his work and his process.

Wikipedia also has plenty of information about Kentridge, from his bio, to listing his films and many exhibitions around the world. There are also external links, if you’re interested even more information about this artist.

In August 2017, Artsy.net reached out to me to inform me of their web page on William Kentridge.

I took a look and it does have a lot of great information about this artist, including many images. So if you are looking for additional info, take a look!