How did I come to my final idea. Well, I rejected many other ideas first. For instance…

UV-Sunlight Watch: I thought I’d try to make one of my fantasy devices. A UV-Sunlight watch that helps you get a good amount of daily sunlight. However, after some research, and learning that UV calculators really do exist, I was a little put off by the idea. A sunlight detection watch is useful, but I wanted to try something original and something that I would like. (Not to say that the idea of a plant that responds is completely original….) 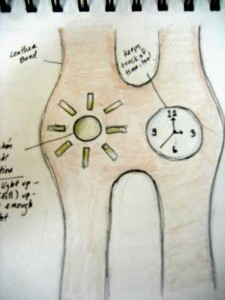 Interactive Floor: I thought about some kind of sidewalk/responsive floor. This came from the knowledge I’d gained in making a switch for the balance board, media controller. I considered a few options for this: the Moonwalk sidewalk, a child’s play area, etc. After I while, I thought that while it could be very colorful and fun, I wanted to try something a little bit more substantive. 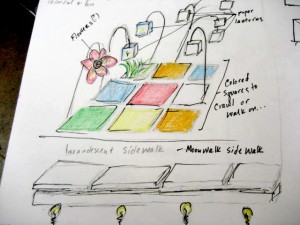 Others: I thought about a never-ending puzzle that would use an accelerometer to control a ball’s descent through a visual maze. Seemed really difficult. 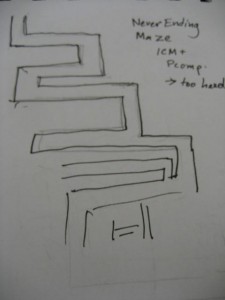 Also, I didn’t properly document it, but I thought about a portable photo booth. I got this idea from a rectangle that had been left in the junk bin and reminded me of a frame. I thought about walking around and seeing the world in photographs. How would this work? Well, my idea was that you would carry a frame on your shoulders and people could take photos with you if they wanted in your photo booth. I did not go with this idea out of fear of the expense of potentially additional camera equipment.

Light-Piano: This idea was to create a grid of LEDs and photocells that, after reaching a certain threshold, would trigger a sound. 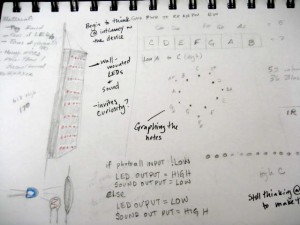 The sounds I wanted would correlate to a musical scale, so essentially you could play a grid of LEDs. I kind of went with this for a while. I thought it would look pretty and you could put it on a wall. I sort of wanted it to look like this, but cost MUCH less.

I talked about these ideas to other students and they appreciated all of my ideas, and they came up with suggestions for me as well. But, something about the idea seemed…oh, unspecific. Like the project was not thoughtful enough. Eventually, as I thought about sensors and realizing that I could use a much smaller grid, with my own sounds, somehow the idea of sighing came to me. Possibly because I was sitting by a window and there was a small plant nearby.

Well, I’ve talked to my fellow students again, about my new idea and they all like it, too. This time however, when I say, “The plant will sigh, like it’s happy to see you, when you come close to it,” they say, “Awwww….” Cute.

One thought on “Intro to Physical Computing: Final Project…Rejects”