Over the past week or two, I’ve been collecting a lot more information about body image, or the body, in relation to artists’ works. Particularly, scholars who’ve written about the body, artists who use the body in their art, or artworks featuring the body or body image. It’s been actually quite interesting to look through all of this information. Here’s a list of what I’ve come across below. For some of them, I’ve written some short thoughts or descriptions about what I’ve seen or understood.

In Rhythm 0, Abramovic placed about 70 articles of pain and pleasure in front of her, and then stood as an object while the audience manipulated the objects with her body. Starting out innocently, the performance turned more malicious and aggressive as audience members began to cut her skin, tore her clothes, fondled her breasts and even put a loaded gun to her head. (She provided the gun and the bullet.) When a guard announced that the performance had ended, Abramovic, now teary eyed, walked towards her audience as one of them, yet many or all of them literally ran away. The artwork questions how we objectify each other and tests the limits of our civility towards each other.

In Interior scroll, Schneeman reads a paper scroll as she simultaneously pulls it from her vagina. Definitely an act of reclaiming her body and her ownership of her sex.

“I thought of the vagina in many ways– physically, conceptually: as a sculptural form, an architectural referent, the sources of sacred knowledge, ecstasy, birth passage, transformation.”

Barbara Kruger, (photography collage) including Your Gaze Hits the Side of My Face, Your Body is a Battleground, You Are Not Yourself:

I have to admit that I don’t quite get the art, but I really like the phrase, “Your Body is a Battleground”. It represents so well how strongly we have to remain conscious of the fact that we have a right to not look like how the media, fashion, and the contemporary body aesthetic tells us we should look.

Cindy Sherman, (performance/photography) including Untitled Film Stills and other photos series in which she dresses up as other people/identities:
This is an amazing selection of images that challenge identity and image. When I looked through these photos, I thought “Who are we really?” Is our identity ours, or do we in some way embody the identity of others? I’m still not so sure I know what Cindy Sherman really looks like….
Link

Pipilotti Rist (video performance) PickelPorno:
Pipilotti Rist apparently made her mark with this video. It features a man and a woman, some nudity, and a fish-eye camera, along with other imagery; some sexual. At first, I really didn’t like the video because not only did I not see any intention, the production quality is fairly poor. (I guess I’m used to HD!) I turned it off, and then returned to watch it. After a while, I found enjoyment in the unusual or overlooked perspective views of the body. For instance, with the camera so close to the body, human skin is seen as it really is – hairy and imperfect. I found that while I often wanted to turn away, I couldn’t. It was like a visual exploration of the body, reminiscent of the way 2 lovers explore each other’s bodies.
View film on YouTube 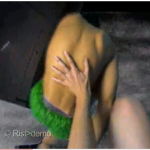 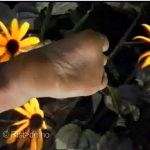 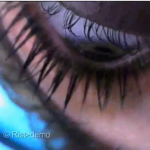 Orlan (‘whose medium is plastic surgery – commenting on the world of artificial changes to the body to be perfect/beautiful’):

Seems as though she has undergone a series of plastic surgeries, and then uses not only the surgical results as artwork, but also the surgery videos. She also seems to want to push our interpretations of chasteness and sexuality in religion, and the openness, or lack of openness, of female sexuality.

Laura Mulvey, (scholarly writing) “Visual Pleasure and Narrative Cinema PDF”. “A seminal work on ‘the gaze’ – how female identity is structured through the male gaze”:
Points

The artist makes performance pieces featuring up to 100 semi-nude and nude models, many of whom resemble the artist and/or have eating disorders. Bancroft admits that she has been struggling with eating disorders (exercise bulimia) since she was 12.

The artist took two blocks of chocolate and lard, bit into them piece by piece, and then made a chocolate box and lipstick out of the pieces she’d bitten. I appreciated this for the repurposing of the lard and chocolate, but biting into lard feels viscerally creepy. Detailed description from MoMA and from Brooklyn Museum. Link

Chris Woebken (design, technology)Animal Perception Helmets:
I love that these seem so game-like, fun, and goofy. My favorite is the ant, because it’s such an abstract view of the world. It also reminds me of Pipilotti Rist’s work, Pickelporno. I’m considering the use of magnification in my project. 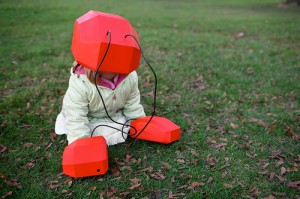 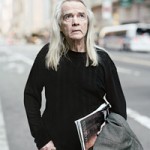 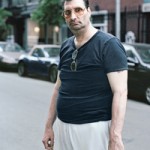 Phillip (“Mr Toledano”) Toledano (photography) A New Kind of Beauty:
Features a series of still photographs of people who have clearly undergone some type of plastic surgery. The people themselves did not look “normal” – as in, their plastic surgery procedure(s) was very obvious – but their portraits were beautiful. For the most part, I found that many of them looked alike, both men and women, as if the same facial aesthetic was the same for both men and women. They seemed so much like a new species of hermaphroditic, male/female neutral people, I wanted their names to be more exotic than just Steve, Yvette, or Michael…. 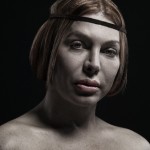 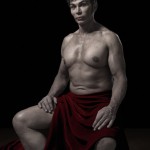 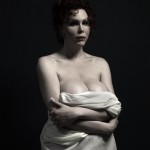 Something-Fishy.org
A few links on eating disorders in men and ballet dancers. (Note: There are few reference links provided, so the factualness of many of these statements cannot be easily verified, but the anecdotal information is useful.)

“A ballet dancer is very aware of what her body looks like. At each practice she attends she wears skin-tight clothes and dances strenuously in front of large mirrors. A dancer has to look at herself for many hours in a day and this can cause a realization in the dancer. The general public may look in the mirror for a few minutes a day, hardly aware of what they really look like, but a dancer has no choice but to stand in front of a mirror and compare herself with others in the room…. The truth is as stated by a dancer, ‘In the real world people who are not thin do not get jobs.’ “ I just came across this artists work and found the camouflage aspect of her art really interesting and beautiful. And, I enjoyed how the work focused less on the body and more of the body’s disappearance into the art. Her website is emmahackartist.com.


Genesis 1:27 God Created man in his own image:
Lastly, I was just listening to the radio the other day, and there was a guy talking about homosexuality and tolerance. The man speaking was relatively conservatively religious, except that he advocated for tolerance towards gays and lesbians (though not towards gay marriage.) In any case, he quoted the Bible and it seemed to fit with my body image interest, so I’ll just add it here, too. Link.