On Sept 27, the Design for Greenfab class made a visit to the Bronx to visit the Greenfab facilities, and to discuss a little electronics while demonstrating how to make “throwies”. Throwies are LEDs attached to a 3V coin cell battery. Fairly simple to put together – you just put the appropriate leads on the battery and attach them with magnets and tape. Voila!

So, while the actual p-comp project was quite simple to put together and explain, our bigger goal was to introduce electricity to the kids, who were mostly boys around age 12. Not exactly the most attentive audience.

At the table with Sue and Macaulay, the 3 of us sort of struggled to explain how electricity worked; how exactly the electricity got from the battery to the LED; how do we know that the LED won’t blow up; why is 3 volts better than 6; what if we want to light up more than one LED; and how long will it take before the battery dies out?

I will say that while the kids seemed less enthralled with our electricity explanation, they did seem to enjoy the personal expressiveness of throwies – particularly when they added about 3 LEDs. I’m not yet entirely sure how to keep the kid’s attention better for next time, but probably just having a more interactive learning session might help.

A discussion Monday night got me thinking about my Phys comp final again. I like the bionic gardening, but I also want something really fun. The other student I was talking with was trying to convince me to do my original-ish LED light board idea. So, at home I thought about it a little bit more.

The interaction: When a user walks by, the LEDs light up in response. The color of the LED depends on how far or close the user is to the LED board. So, the closer, the more red; basically it goes through the visible light spectrum starting from indigo to red.

In addition, my original idea had sound output as well. Sound might be too confusing. I sort of just like the LEDs. I think this is something that would look spectacular, but I just don’t feel that I have enough time.

UPDATE: Perhaps I’ll just do this on my own, anyway. Seems easier than the UV Sunlight watch, but more difficult than the talking plant. In any case, I need to order ton 0′ parts, soon!

We were assigned to create a “stupid pet trick” which combines a bunch of stuff we’ve learned in our previous few weeks. It doesn’t have to be logical, which is why it’s called stupid. Some of my classmates made really awesome stupid pets, that weren’t really stupid at all. Mine, I admit, is a little goofy.

For now, I’m going to call it, “The Pickup Artist Bear, for Sensitive Gals and Guys”. Here’s how it works:

Step 1 – The Pledge: The Bear finds someone he/she would like to pick up. Bear sings a sweet song to attract Gal/Guy.

To play the song, you press a button. I installed my button within the neck of the teddy bear.
The song plays while the button is pressed. When you let go of the button, the music stops. When you press again, the song starts off from where it left off.
When you get to the end of the song, the music starts again at the beginning. 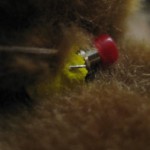 Step 2 – The Turn: Guy/Gal is sufficiently impressed with sweet, sweet song. Bear continues the pickup by helping Guy/Gal build self-confidence by showing you how tender your caresses are – and in the process, shows off ability to be affectionate.

For this, you squeeze the Force Sensing Resistors on the breadboard. To do this, I’ve set up 2 analog inputs which take a variable level of force not equally set. So, the same level of force for the Green light will not necessarily work for the Yellow. If you light them both, the red light comes on and teddy bear’s heart lights up. It’s a little bit tricky to do actually, and you can adjust it to really annoy your friends. 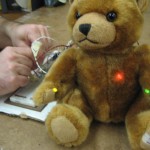 Step 3 – The Prestige: The bear has now sufficiently won the heart of Gal/Guy, and now gets you to really show your affection. Bear asks Gal/Guy to spill secrets. Bear shows happiness.

Lab 1: My experiences with observing people use interactive devices, and setting up a breadboard and an Arduino microcontroller.

This sort of took place in two stages. In one stage, I walked around thinking about the different types of digital interfaces people rely on, on a day-to-day basis. For instance, buzzers for apartment buildings, cell phones, security cameras, digital cameras, and street lights to go or not when crossing the street. In the second stage, I actually counted the number of people using cell phones or iPods while walking home. I counted 22-25 within a 5 block radius, around 11PM.

At Union Square, I noticed the ticker display sign advertising the upcoming movies. That, according to Crawford, is not really interactive, but more reactive. Neither is the crosswalk. It’s simply a sign that I read and decide whether to walk (or run) across the street, or just wait for lights to change. But, because the sign doesn’t change based on my actions, it’s not really interactive.

Recently I went to see 9, the movie. (Um, it was cute.) I used the ticketing kiosk to purchase two tickets because it’s usually faster, and I don’t always like to deal with tellers. Sometimes I don’t hear them so well, or they ask me for my phone number or zipcode – which I don’t see is any of their business – or they just aren’t very friendly. The kiosk probably gets my zipcode and phone number, too, when I swipe my credit card, but it seems less intrusive since there’s not an actual person asking for my information. Plus, the machine communicates in written English, colors, and symbols, which usually means I don’t have to interact with accents or styles of speaking that I’m not used to.

Unfortunately, the machine made a mistake that day. After paying for my tickets, the machine’s touchscreen returned to the “home” screen after printing out only 1 ticket and no receipt, a signal that my transaction was over. I walked away with only 1 ticket; so, in the end, I still had to wait in line. And, yes, the teller and I didn’t really understand each other – she gave me a ticket for the wrong movie.

Setting Up the Arduino and Making Blinky Lights
This was an interesting project. I tried following the instructions as given on the lab for Physical Computing, but I guess I wasn’t naturally born with knowledge on how to set up a breadboard. So, this took a lot of tries to get it right.

Some of my problems were not lining up my ground and power with the right outputs to the switch and LEDs. Some problems were that the wires kept breaking. In the end, though, my biggest problem was the fact that I had 4 wires too many, and none of them crossed over the central divider so nothing was getting powered up. This realization came from after running Arduino a couple of times and getting the same error, then fixing the breadboard and getting the same error. Then, checking…checking…CHECKING…!!! And finally comparing my set-up with someone else’s, and coming to a group conclusion about the extra wires and lack of power.

Then, my blinky lights worked and I had lots of fun!

! UPDATE !
For more stuff to do in my spare time, I sewed a button into this teddy bear’s neck. So, when you squeeze the teddy’s neck, it triggers a light switch. 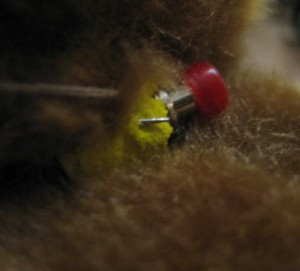